The Little White School Museum embodies the purpose and values of the Oswegoland Park District while executing the mission of the Oswegoland Heritage Association. In collaboration, we create opportunities to share our dynamic history through an accessible and engaging community museum.

Read more about LWSM’s partnership with the Oswegoland Heritage Association. 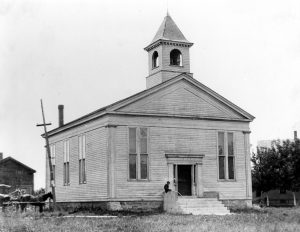 Constructed as a church in 1850, it sits at Polk and Jackson streets in downtown Oswego. After the dissolution of the church, it stood empty for two years before being purchased as classroom space by the Oswego Grade School District in 1915. Little White School originated from “The Little School,” its first name, when it needed to be differentiated from a neighboring red brick school.  First through third grade classes, as well as junior high classes, were held in the building as Oswego Community Unit District 308 grew in size before the Little White School eventually closed its door in 1964. 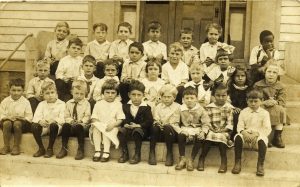 After being saved from being torn down, a community effort was mounted in 1976 to save and restore the building, and create a community museum and archives that would protect, preserve, and interpret the history of the 68 square miles encompassed by the Oswego School District. In this unique cooperative agreement, the not-for-profit Heritage Association pledged to guide the faithful restoration of the building, while the Oswego School District agreed to retain ownership of the school and site. The Oswegoland Park District agreed to take over maintenance of the building and grounds—renamed Heritage Park—and to assist with regular building repairs and operations. 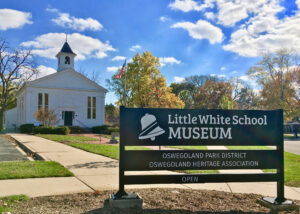 In 2010, the Park District Board of Commissioners approved an intergovernmental agreement transferring ownership of the Little White School Museum and Heritage Park to the Oswegoland Park District. Today, the Little White School Museum houses a state-of-the-art the community museum, over-seen by the Oswegoland Heritage Association, that tells the story of Oswegoland’s history and development. The museum’s archives and artifact collections, also maintained by the heritage association, that was envisioned more than 30 years ago contains nearly 40,000 items from photographs to documents to three-dimensional artifacts. As the oldest public building still in use in Oswego Township, the Little White School Museum is a monument to an extremely successful public-private partnership. It is also a living, direct link with Oswego’s pioneer past as well as providing a valuable repository for the history of one of the fastest growing areas in the United States.

Read more about the Museum’s History.