By Roger Matile, Board of Directors, Oswegoland Heritage Association 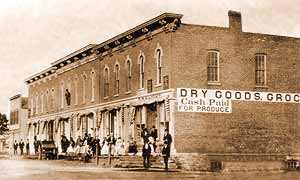 Downtown east side of Main Street 1875 – Located about 50 miles west of Chicago at the confluence of Waubonsie Creek and the Fox River in Kendall County, Oswego was settled, at least in part, for its transportation potential. A limestone shelf creates a natural, smooth-bottomed, ford across the river just above the mouth of the creek, making it a favored crossing first for Native Americans and then for the American settlers who began arriving in the 1830s.

William Smith Wilson and his wife, Rebecca, were the first settlers on the site of what is now Oswego. Wilson and his brother-in-law, Daniel Pearce, scouted the area in 1832, permanently moving their families to their claims in 1833. The area began growing that year, and in 1834 two newly arrived businessmen, Lewis Brinsmaid Judson and Levi F. Arnold, platted a new village they called Hudson. One of the early roads to Galena crossed the Fox River ford at the new town, and in 1836 the Temple, later Frink & Walker, stagecoach line began regular service on the “High Prairie Trail” branch of the Chicago to Ottawa Road through the village.

Although Judson and Arnold had called their new village Hudson, the U.S. Post Office decided to call the post office established in the village in 1837 Lodi. The evolving confusion led to an informal referendum in 1837 during which neither Hudson nor Lodi was picked as the town’s name. Instead, they decided on Oswego, named after the city in New York near which several early settlers lived. 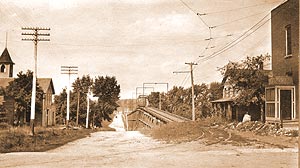 The ford across the Fox River was an economic draw from the very beginning. Decoalia Towle and his wife Elizabeth established an inn and tavern at Oswego on the road to the ford, joining Arnold’s general store and, after 1837, the post office, in Oswego’s growing business district.

According to the chief of the crew surveying the area for the U.S. Government in 1838, James Reed, Oswego consisted of about 30 wooden buildings that year. Hotels, including the stately National Hotel on Main Street, the Kendall House, the Smith House and others were soon built to handle the stagecoach passengers and other travelers using the roads through Oswego.

By 1845, Oswego Township had enough population to win a referendum on moving the county seat to Oswego from Yorkville. The first term of the circuit court was held that year in the National Hotel. In 1848, a new Greek Revival courthouse opened on the block bounded by Madison, Jackson, Monroe, and Jefferson streets. The county seat remained in Oswego until it was moved back to the more centrally located Yorkville in 1864. 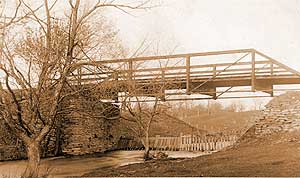 Although Oswego lost the county seat, the extension of the Fox River Branch of the Chicago Burlington & Quincy Railroad through the village in 1870 proved another economic boost. In 1910, the Aurora Elgin & Yorkville Railway, an interurban trolley line, made another connection to Oswego from Aurora to the north and Yorkville to the south. With the advent of inexpensive automobiles in the early years of this century, and the paved roads they required, Oswego once again found itself to be a transportation hub where three state highways–Ill. Route 25, Ill. Route 71, and Ill. Route 31–originated and through which two U.S. highways–U.S. Route 34 and U.S. Route 30–pass.

From the removal of the county seat until the mid-1950s, Oswego was the mercantile hub of a large surrounding agricultural area. Then in the mid-1950s, Caterpillar, Inc. and Western Electric (then the telephone equipment manufacturing arm of AT&T) announced plans to locate facilities within Oswego Township close to the village. The proximity of the two large industrial plants led, at the same time, to the development of the sprawling Boulder Hill Subdivision just north of Oswego in unincorporated Oswego Township. For the next 40 years, Boulder Hill was the largest community in Kendall County.Fox River Bridge 1867 Then in the mid 1980s, the homebuilding boom in Naperville and Aurora spread west, and housing developments began to spring up around Oswego. In order to control development in its immediate area, Oswego began to encourage annexations, extending its boundaries west of the Fox River for the first time in its history, and growing east and north to U.S. Route 30. In the 1990 U.S. Census, Oswego’s population stood at 3,875. Just seven years later, a special census showed its population had risen above 9,000, finally surpassing Boulder Hill and making it the largest community in Kendall County. 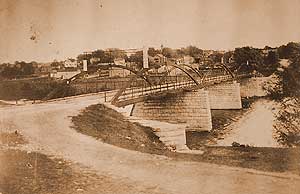 By the start of the year 2005, Oswego’s estimated population stood at 21,000. As Oswego continues to grow, its location on two rail lines, three state highways, and two U.S. highways, along with its robust economic development, the village to be experiencing another period of economic and population growth very similar to that which took place during the settlement era of the 1830s.